This was the second exhibition I had installed and taken part in. The first was at my previous college where I completed my foundation course.
This time the experience was a lot more focussed on team work, as all the fine art course had to pull together to organise and produce a finished result that was open to the public. A daunting task to start with. Having had a few meetings with the group we came up with a name for our exhibition. We called in ‘M’or M-exhibition.
We decided to split the group into four smaller groups that could work on specific areas of the organisation. This gives each group a more focussed task, and meetings were planned to feedback from each group. The four groups were marketing, logistics, curating and fund raising. I chose to be in the logistics team because I’m quite a logistical thinker, and I also have a car which helped a lot with transporting work too and from the gallery space.
As part of the logistics team we had to think about health and safety, transport, hanging, lighting, erecting walls and sorting the gallery space out to look professional.
Having found the space that we had all agreed on, we got the keys and had a good look around. There where pro’s and con’s with the Arches space. The space was quite large, and split up into three segments which meant the work may have become divided, but this was good as each part had different lighting and a slightly different feel. The space was well lit, but the lights weren’t to my liking because they were almost too bright and I think they took away some aspect of the galley feeling. The space had lots of power outlets so people could light their own work individually and also install things like t.v.’s and projectors, this was very useful.
The main concern for the space was the damp in the air and on the walls. This meant people had to be very careful their work wasn’t ruined by it. There was nothing anybody could do about this so most people didn’t hang their work till the last minute.
Now we had a space and a deadline, it was up to the logistics team to create a timeline for everyone to see, so that the other teams knew what was going on. After this we met with the curators to make a floor plan. We then set about loading boards and walls into the college van to take them down to the space. I started to sweep and mop areas that were really dirty, and then we erected all the walls that where in the plan, this took a lot of measuring and teamwork. We also had to paint all the walls white and clean the place up to create a professional gallery environment.
With time pressing, it was up to the logistics team to hang people’s work who had not yet done so. Again this took a lot of measuring and teamwork.
I think the opening night was a great successes and this proved that each team had pulled together and done their job successfully. It was a great experience to stand in the gallery full of people that just a week before was an empty storage space.
At the end of the show it was our responsibility to take down the walls and get them back to college. The logistics team worked very hard when it felt like there was nothing to gain.
It was a great experience for me and I am already looking forward to my next exhibition.
Posted by Joe Taylor at 02:52 No comments:

Molecular Perspective. ( photographed from the wrong angle without spotlight) 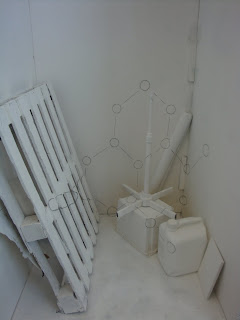 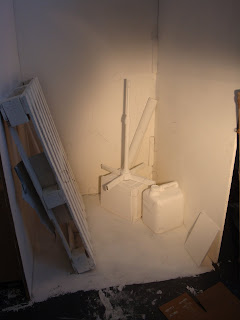 I have been interested in the Big bang theory ever since I learnt about it. The theory that everything that exists in the universe came from one infinitely dense mass of particles that exploded many many billions of years ago. All these particles used to be as one, but are now still expanding outwards beyond what the human brain can comprehend. I find this theory fascinating because it claims that everything that ever was still has a connection, everything is made up of atoms that are arranged in different ways, molecular forms that scientists have created to help our understanding of the smaller picture, which is ultimately the bigger picture, we just can’t see these molecular forms as they are microscopic.
The anamorphic drawing works because all of the lines are drawn so that when they are viewed from a certain angle they appear to be continues lines. This is an optical illusion because when the piece is viewed from all other angles the drawing doesn’t make sense. Some of the circles appear stretched out and distorted. All of the angles and lines have to work together to make sense of the drawing, much like the atoms that form together to create objects.
My aim is to show the viewer that everything has to be lined up perfectly to create the illusion, if one looks at it from other angles then there is gaps and distortions that result in an unfinished looking drawing that doesn’t seem to make sense.
In the process of drawing I decided to paint everything in the space white, this is because I wanted to show the similarities of the objects. They are similar because they are all made of a complex network of atoms which are invisible to the naked eye. I could have put anything in the space because everything is made of atoms.
I call the piece ‘Molecular Perspective’ because it shows a molecular form which can only be seen from the correct perspective. Aimed in encouraging the viewer to think about how everything has to work in harmony to create a product.
Posted by Joe Taylor at 09:23 No comments: 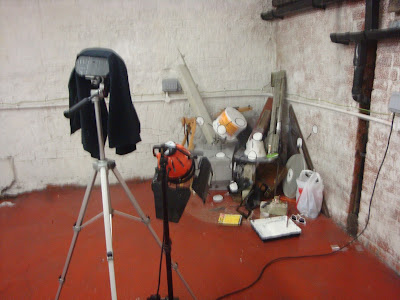 Its all over! the opening night was a great experience for me, for all those who took part as well I am sure.
although its hard to tell exactly how many people turned up, we do know how much booze we gave out
- 102 bottle of wine
- 100 bottles of beer

I think this reflects the attendance for a 2 hour show. Every body seemed to be enjoying themselves and I heard a lot of intelligent discussions about the work as i was walking around the space.  The feedback I received proved that people liked the alternative ' run down ' look of the space juxtaposed to the white walls that we had erected in other parts of the space. A quote from a friend of mine, ' Im shocked to see the professionalism that the students are capable of, I was expecting to see an A-level type exhibition'. I agreed with his statement because the last exhibition I hanged was at my previous college, and the M-exhibition did have a very different feel to that.

There was a lot of spare space that could have been utilised, and I think the one and only toilet was playing up slightly, which was a major problem on the opening night. I would also liked to have seen the floor  squeaky clean, but perhaps this added to the rustic feel of the show. Other than that I think the exhibition was a success, considering that we only had the space for 4 weeks.

More photo's to follow.
Posted by Joe Taylor at 06:01 No comments:

my work titled 'Molecular perspective' installed at the M-exhibition. ( this is the view from the viewfinder placed in front of the piece to achieve the right angle) 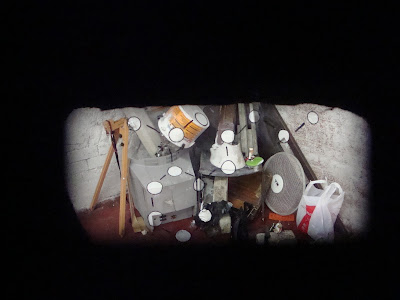 I am preparing for a fine art exhibition at the ARCHES in Leeds city centre!!!!

the show consists of mine, and my course mates work in which we have all been proparing for some months now.
the title of the exhibition is M for MATTER! 28th March to the 1st of April.

My own work is based on the idea of tromp d'eol  (trick of the eye) and shows an outline of a molecular structure created using an anamorphic drawing technique!
from most angles it appears as a pile of junk, but when viwed through the view finder, the image becomes apparent. pictures will be posted in due time!
Posted by Joe Taylor at 06:40 2 comments: